I want to redo some groundwork training, especially the one where she stays at my side and not gets too far ahead.  Those exercises are on Series Two which is on VHS.  I found the set on eBay on DVD and made an offer of $20, and it was accepted!  Rec'd it yesterday.  Gonna start working on stuff tonight.

I know I didn't make any certificates for her for Series Two or Three, and now I know why.  I started riding her after we finished exercise 16 of Series Two ( thank you me for recording it here, Jan 3, 2009!  We were preparing for HOTMHC Fun Show and skipped around).  So we're gonna officially finish the series now.    Hopefully I can fix the things that have gone wrong since then lol. 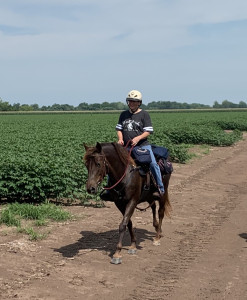 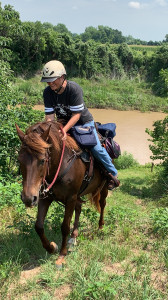 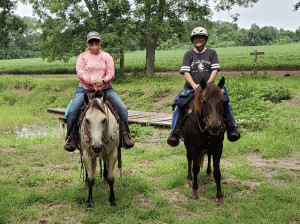 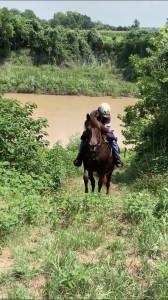 so good, so GOOD!  Giant hill! Jogged but only took a few mins to walk again! NO calming stuff AT ALL!   Sooooo proud of her!

So Cricket had puffy and watery eyes the other day.  Gross inflamed corner of her eye. Missy has been great.  I gave Cricket some spirulina tabs.  Yesterday she looked ok, but Missy looked a little rough.

So I thought about it, Cricket was eating Missy's food, until I got Nicole to use the hookover feeders.  Its been about 2 weeks.  So Missy has been gettng her full dose consistently, and now Cricket isnt getting any allergy herbs.  So I'm dc-ing Crickets coat herbs and gonna give her allergy herbs, too.   Something is different over there that is bothering Cricket.

And I just bought a cantle bag.  Same company that made my saddle bags, but got it in navy cuz it was DC'd and 50% off!  So horse holster, horn bag and cantle bag are navy, saddle bags sparkly purple.  Coulda bought black but that was full price.  I figured oh well, I was using that gross green one...  well, I was going to.   It will be fine.

Tried it on Friday —  seems good.  Had Nicole estimate.  She ran her hand under the pad, said there was plenty of room at shoulder.  YAY!  Did a quick walk around, she adjusted my stirrups for me.  I made the right one 1 hole longer than left.  Dees for breast collar are higher, so prob won’t need my wither strap.

Didnt get another opportunity to ride until Sunday.  Got my flank cinch set Saturday.  A lot lighter than I expected, so I will oil it, and its very rough looking.  But it fits, on the last hole!

(How do I add photos?  they are in scrapbook in Tack album.)

I bought a saddle.

I tried to keep lifting the heavy but wonderful Circle Y, but I just can't.

So its a hybrid, leather and cordura. 22#.  Bought a rear girth pkg to go with it.  Got $20 off saddle, and free shipping, and was able to pay cash, by using car skip a pay.

Pictures when I get it.  Oh, shipping to barn...

Tied as best birthday ever ;)

Started off kinda scary, the temp was down and it was windy.  The cremello was loping around, lunging himself, and Cricket went from 0 to 100 in a blink of an eye.  She walking like she's dead behind me then she's 3 feet in the air, tail flagged, kicking out, running in circles around me.  JEESH.  It took forever to get to the barn!

She's all excited.  But she loaded without the other door open!  GRADUATION!  She just walked right in!  And then moved over to her spot so I could close the slant.

Rebel came.  First time he was ridding in a year, and he broke loose TWICE while trying to load him.  We were ALL apprehensive about having him along.

But once we got there, everyone was perfect.  Cricket was calm, I got on with the stirrup, got to use my new gear (! YEAH !) and she walked off like it was no big deal.  But then, she seemed to be taking care of Rebel.

She kept looking back for him, and stopping herself to wait for him to catch up (he walked like molasses).  If we were on the R side of him, she was fine, but if we were on the L side, she kept swinging her butt towards him, and I was afraid she was gonna kick.  She never did, but I was afraid,  If we were in single file, and she was #2 (and even #1 for awhile!!!) she was good.   It was just if she got out of single file, and saw him, she fussed over him.  Like she was trying to reassure him.

We saw TWENTY armadillos!  They are super noisy when they run into the brush.  Cricket startled at the first 5 or so, then she kinda figured it out there was nothing to fear.  One even ran alongside of us, and she took a GOOOOD LOOOOK at it, haha.  After that, rustling in the brush didn't even phase her.

We jogged a bit, she kept it kinda slow - nice!  I didn't get the chance to canter.  We were afraid of holes in the fields b/c of the dillos.

But she has been very good.  I want to wean her off the calm stuff, but not sure when...

Next ride we may go back to Heyne, and may not be until Jan since Dec is busy for everyone (and Dana is getting married Dec 14).  I've invited Barb Freisenhahn to come, and maybe Esther.  I think Dave would like to come, but he's afraid Missy will die.

I forgot to post lol. I thought about it, then forgot, now here it is 1:30 AM Thurs!

The ride was Sat the 16. Lazy F is an oilfield property, with oilfield things, including cattle, on it. 3400 acres or something, 4 square miles, 75 miles of trails, through semi cleared terrain. I liked it! It had so e pebbly places, so need Cricket’s boots next time.

She was nervous, 10 other horses. Took her a good 45 mins to calm down (jigging and jawing, looking in the trees for scary things), but once she did, she was awesome again. A few startle shenanigans, but tackled all obstacles with no hesitations. I think she’s getting the hang of this! 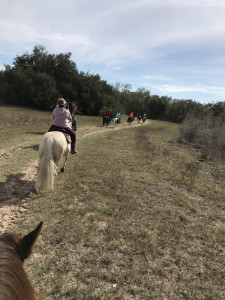 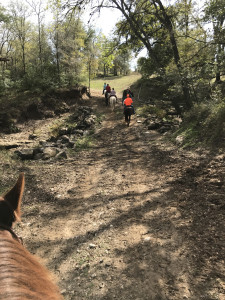 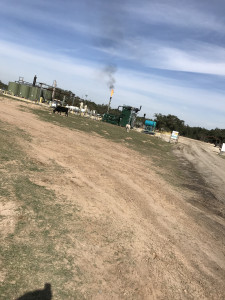 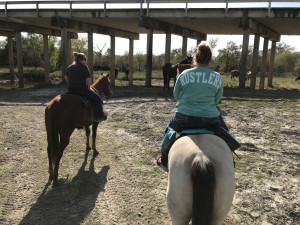 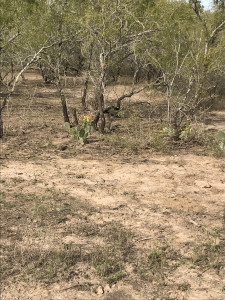 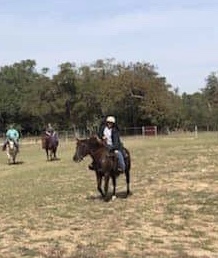 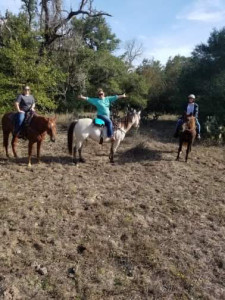 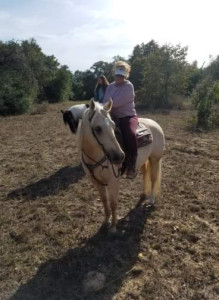 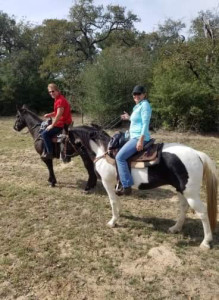 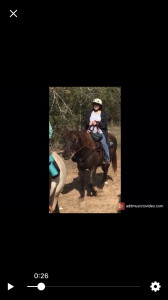 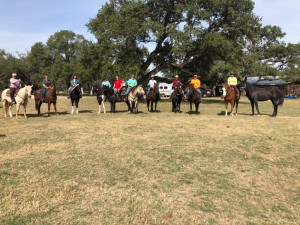 Going on ANOTHER trail ride tomorrow!  I asked Nikki to ride on my birthday, and it has turned into a group thing tomorrow, with the option to ALSO go to Brackenridge just me and her next weekend, for my birthday!

And, I am buying stuff...  bought the wither strap a few weeks ago so I can use that tomorrow, but also bought a horn bag a few days ago (not here yet) which is insulated so I can take food.  My saddle bags  that I have had as long as Cricket are a mess - the vinyl lining has decayed and ripped.  I was going to fix them, but it's so much effort... and I don't like the straps...  blah.  Was easier to buy something else.

So I decided on the horn bag, insulated.  Bought an expensive-r one from a reputable brand so it should last forever.  Then I was looking at other cantle bags, even though the green one is still in good shape.  Found a black one from Cashell that has an extra pocket specifically for a jacket/raincoat.  I like it.  Then found clearance saddle bags from Trail Max/Outfitters (well made, super reputation) so I bought them.  Can still use my cantle bag with that, so may not buy the cantle bag.  And added a curb strap that was not leather and not chain, and not expensive.  All will be here next week.

Very excited! Butterflies already!  Just a little concerned about how wet everything will be.

We'll see how it goes!

Oh and Outfitters has a very nice western D twisted snaffle - it's floral engraved!  But it's almost $80.  But so I know where to find it again, if I so decide lol.

Had a GREAT time at Heyne Ranch! Cricket was PERFECT. SHE was all stupid rubbing and excited at the trailer, but as soon as I got on her she was all business.

She walked up and down the hills, without much control from me, like she KNEW that was what she was supposed to do. We even closed a gate! I had to tell MYSELF to put her in the position she was used to, and then she did it ❤️

We loped - LOPED! A short way, so relaxed and comfy. What a great girl!